There are all manner of ways you can be sold diversification, but one of the worst is the lie that you can enjoy diversification by owning one company. And for evidence of this you should look no further than BHP Billiton, the world’s largest (or second largest depending on who you listen to) diversified mining company.

If you’ve ever bothered to read an analyst or broker report on BHP you’ll inevitably read terms relating to its diversification within various commodities and energy as a positive, but it overlooks the issue that its business is still 100% a resources company with no real diversification.

Owning a ‘diversified’ mining company rarely offers any benefit when times get tough. Commodity downturns often take many commodities with them because they all follow a similar pattern. They start with a demand for various raw materials, some of which are used together in production of a product or in conjunction later in construction or manufacturing.

The increase in prices then makes less economic projects suddenly viable; while it ensures existing producers will want to expand their production to capitalise. Within a few years there is a supply deluge. The cruel irony is many of the new projects and expansions arrive at the same time, flooding the market and pushing down prices. This is where we are now, with the commodities market and with BHP.

BHP’s recent results showed an underlying profit of US $412 million dollars, but a multi-billion dollar loss after write downs on various projects. The bad news kept coming with a large cut to its dividend. This is how CEO Andrew Mackenzie sold it to investors:

“Hang on in there would be my message. We have done an awful lot of work to allow ourselves to survive and prosper in current conditions. We are in some of the best commodities, we have some of the best ore bodies, our operations are incredibly well run and, as a result of that, we deliver things that at reasonably low cost and are very competitive.”

Which may be true, but if you were sold on BHP’s diversification and bought in, you’re likely now licking your wounds. It’s been a steady downward slide since this time last year for BHP even after spinning off some of its less profitable projects into a new company, as the chart shows. 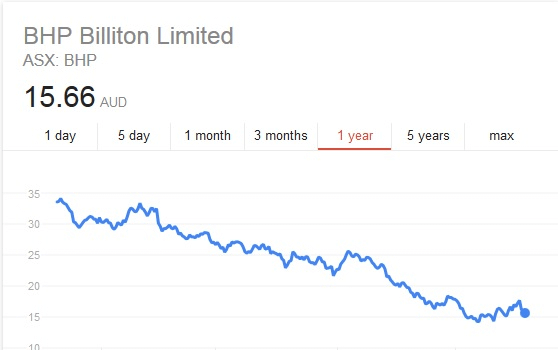 What the chart doesn’t show though are the broker and analyst reports that were happy to sell investors on BHP’s diversification. As you can see BHP is down over 50% in a year, but it’s impossible to find a broker or analyst who predicted such an outcome.

Even when offering a ratings downgrade, none of the brokers covering BHP up until last year were contemplating the share price under $30, let alone in the teens – until it was already there.

Here’s a selection of broker targets from 2015.

Most of the price targets barely deviate from the price at the time when the analyst made their call, Macquarie being the exception. For the most part the price goes down and then the analysts readjust their price down to something nearer that price.

The most important thing you can know about any investment is the worst case scenario. The fact that the worst case scenario was often little different from the share price at the time suggests analysts engage in confidence tricks which continually undersell any possible downside. Not that this should be a surprise, as has been shown before investors are usually the last thing on an analyst’s mind.

Or we could give these analysts the benefit of the doubt. Maybe they truly believed there was nothing to worry about because BHP was diversified.