After the RBA left interest rates on hold last week the commentary quickly shifted to when they would be cut next. To co-opt a line from Star Wars, you may have felt a great disturbance in the force “as if millions of conservative investors suddenly cried out in terror”.

There won’t be much joy if you wander into the branch of your local big four and ask for a sit down in their frosted office with the cheery customer service rep. If you demand the best deal they can give you, at the bank with the big red W they’ll offer you 5. Five years that is, to get 3.10%.

If you ask NAB to sharpen their pencil it will be 3.00% over 5 years. Commonwealth will give you 2.90% and ANZ brings up the rear with 2.75% to lock up your cash for half a decade.

Factor in the hassle, inflation then tax, and a Milo tin buried under the dog’s kennel for five years doesn’t look a half bad option for the rusted on cash investor!

Needless to say, savers are hamstrung these days and as the opening paragraph highlighted, it’s likely to get worse. While some optimistic cash believers have been touting the line that rates can only go in one direction from here (up), bond yields are signalling otherwise.

Here’s the 10-year Australian Government Bond yield in the background, with Australian interest rates over the past 10 years sitting in the foreground. Yields on bonds are partially an indicator of where markets think interest rates will move next. 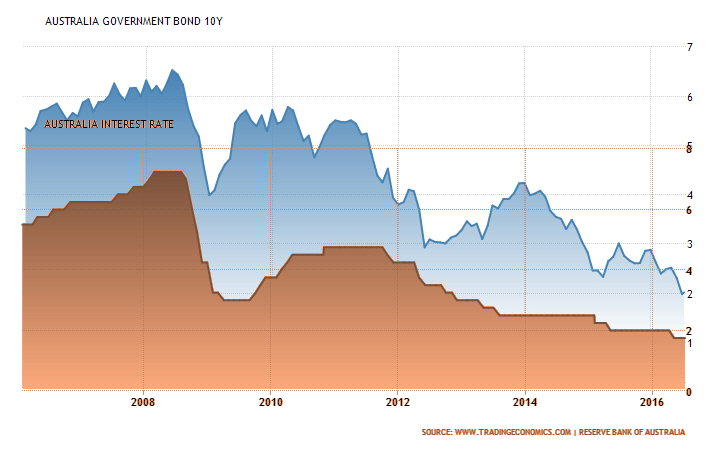 Meanwhile Australian bond indices have charged higher over the past year.

As many investors have fled to safety they’ve pushed up bond prices and depressed yields. Great for existing bond fund holders, but not much chop for those late to the game or long term cash fanatics.

Government bond yields have cratered everywhere since Britain voted to exit the European Union. German bonds are negative along with those in Japan, while the UK is looking to cut interest rates again to provide a buffer against the Brexit hump.

This is what happens when things get scary. Investors flee towards assets that pay less because they’re safe, while central banks cut interest rates to push back against the fear. The trade-off is making next to nothing or less than nothing while the essential fixed costs keep rising.

This should be the real concern for those afraid of risk. If you don’t already have a large bucket of money, sitting on what you’ve accumulated in cash to avoid volatility assures little return going forward.

Growing a portfolio is the key and that doesn’t happen without a dose of risk. Growth is still out there, but it doesn’t come without a few ups and downs. Investors who ride them out have historically been rewarded. Investors who flee to what they perceive as safety will eventually understand their biggest risk was never losing money, it was running out of it.