Buffett’s Bet Poised to Pay Off

Midway through the quarter Warren Buffett released Berkshire Hathaway’s annual letter to shareholders. Most notable was Buffett highlighting his now million-dollar charitable bet with an asset manager that no investment pro could select at least five hedge funds to keep pace with an S&P 500 index fund over ten years.

Buffett publicly offered the wager back in 2006. However, in an industry where active managers base their performance on beating indices such as S&P 500, only one man, Ted Seides of Protégé Partners, stepped up to take Buffett’s challenge.

Seides picked five funds (which would not be publicly disclosed) and their performance would be averaged and then compared against Buffett’s choice of Vanguard’s S&P 500 index fund.

After nine years the results haven’t been good for the hedge funds. 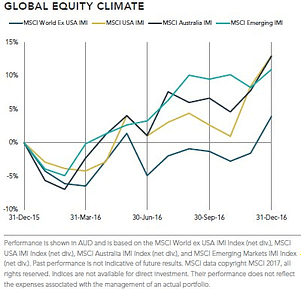 You’ll note, if this performance is consistent in the final year of the bet, Buffett’s investment will double in ten years, while the hedge funds will have just kept ahead of US inflation.

I’m certain that in almost all cases the managers at both levels were honest and intelligent people. But the results for their investors were dismal – really dismal. And, alas, the huge fixed fees charged by all of the funds and funds-of-funds involved – fees that were totally unwarranted by performance – were such that their managers were showered with compensation over the nine years that have passed.

And he noted why it’s hard to find a successful active manager who will be worth their fees:

Further complicating the search for the rare high-fee manager who is worth his or her pay is the fact that some investment professionals, just as some amateurs, will be lucky over short periods. If 1,000 managers make a market prediction at the beginning of a year, it’s very likely that the calls of at least one will be correct for nine consecutive years. Of course, 1,000 monkeys would be just as likely to produce a seemingly all-wise prophet. But there would remain a difference: The lucky monkey would not find people standing in line to invest with him.

We would note if it came down to a monkey or an active investment manager, there’s no guarantee of exceptional performance from either, but the monkey’s fees will be much more reasonable.

This material is provided for information only. No account has been taken of the objectives, financial situation or needs of any particular person or entity.