Over recent months and weeks, I managed to persuade, cajole and convince my wife to allow me to spend around $35,000.00 of our savings, to invest in XXXX Resources. My wife is very conservative and careful with money, and it is only because of this, that we have what we have, today. I was completely honest with her, and told her that investing in the stock market carries a risk factor, and stated that many people have not only made a fortune, but, also, lost a fortune through this method of investment. I encouraged her to join with me in taking the risk – after all, Rubies are rare, and highly sort (sic) after, so I felt investing in the company was worth the risk, and with the pending auction in mind, I couldn’t see how it could really go wrong!

That’s the beginning of an open letter to the managing director of a speculative ruby miner listed on the ASX. It was recently posted on a popular investment forum. The last line is key because that pending auction went very wrong.

A few days later the same person posted a follow up:

At the moment, I feel like I want nothing more to do with share trading. I don’t think I have the right temperament for it. I’m just feeling a bit sorry for myself, and I know my wife will constantly remind me about this in the coming weeks and months. I doubt I’ll be able to sell my shares for anything like I paid for them, so I’ll probably hold on to them, and hope for the best. My concern now is that if the company ceases to be and folds up, as a result of this debarcle (sic), I’ll lose the lot!

In the past we’ve highlighted something we’ve termed the illogical investor’s path, it might also be termed “the speculator’s journey”. This investor is following it impeccably.

Next the illogical investor does their research (usually questionable), as was noted by the investor himself further down in his letter. “In the lead up to the auction, I eagerly read hundreds of posts in the Hot Copper forum”. Yes, his research comprised reading posts on an investment forum by anonymous people.

The illogical investor inevitably stumbles across something that casts their ‘investment’ in a different light. In this instance news filtered out over a weekend that the ruby auction was not going well for the company. Panic sets in, as the investor noted, “I have to admit that the shock I experienced when I read the report on Diamondworld.net on Saturday evening made me feel physically sick, and I could literally feel my heart beating in my chest.”

Finally, as noted above, the investor’s days of investing are numbered as they swear off risk. Inevitably this means sticking their cash in the bank, where they can enjoy the ‘safety’ of no capital growth, erosion by inflation and taxation at their marginal rate. However, they’re not beyond pointing the finger of blame and using a little bit of guilt on their way out.

I feel you need to realise that there are hundreds of dad and mum investors out here in suburbia, who have invested their hard-earned money in shares, as a way of setting ourselves up for financial security at as we approach our old age.

The illogical investor needs to concede he was doing little more than gambling and there’s no one else to shoulder the blame but himself. He’d plonked a substantial amount of money into a resource company operating in the junior end of the market before that company had any track record of success.

His emotional reaction showed, despite talking about the risks he was taking, he had no real concept of them and had inserted himself into a binary risk/reward scenario. It was going to be very good or very bad outcome.

Investors are often lured into junior resource companies with little understanding of how likely they are to do their dough. A common phrase tossed around is “XXXX company is the next Fortescue”. If you’re unaware, Fortescue is Andrew Forrest’s company which grew from this junior space to become a major iron ore producer with a market capitalisation of $15 billion at last count.

Why do people keep saying “the next Fortescue”? Simply because there are so few other companies that come from this space that become genuine successes, but Fortescue has the story that makes the inexperienced ignore all the other failures. 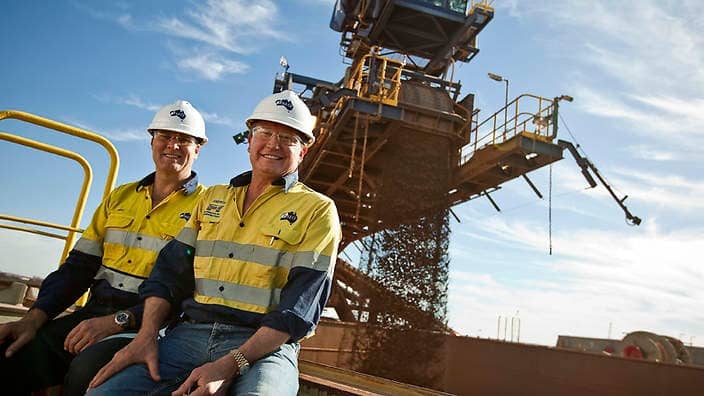 Consider the boom in iron ore prices over the past 15 years and the expansion in mines and iron ore export.

At one point in time there were dozens of listed companies prospecting for iron ore. How many became producers? There may be more, but only four come to mind, BC Iron, Atlas Iron, Mt Gibson and Fortescue Metals. Just don’t ask BC, Atlas & Mt Gibson shareholders how they did because while the companies still exist, the shareholders were taken to the woodshed. Even Fortescue is well off its highs.

The odds of any junior miner becoming the next Fortescue are up there with winning the lotto. The logistics, cost and lead time involved in mining projects mean the only ones often able to capitalise on temporary high prices are those with the experience and the deepest pockets. It’s why the biggest beneficiaries of the recent boom were the existing players – BHP and Rio Tinto. Most of the others continued issuing shares (and diluting shareholders) to survive and have moved on to the next hot metal. Alternatively, they went bust and were recapitalised before moving onto the next hot metal or sector.

Back to the illogical investor, his last post on the investment forum noted he’d lost $25,000 (and presumably his hearing when his wife found out).

PrevPreviousMore Transparency On Super Fees
NextWatch Out For Age Based SuperannuationNext