Right now, there’s a rush on. It’s all about removing your hands from the steering wheel of your car. Maybe removing the steering wheel completely and letting the car do the work. Driving to work, to your holiday destination, visiting family a few hours away or just down to the supermarket.

What will you do? Read a book? Watch a movie? Sleep? Stare out the window, confused that your car is driving itself?

How long is this going to take? First, it needs to be fully perfected. Then governments will need to be persuaded. Then the mass market of drivers will need to be convinced. Will that be hard? We’re happy to leave it to the machines in other areas, but this is a step up in trust. It involves us relinquishing control to a machine hurtling along at high speeds in. Tesla already has an autopilot mode and drivers are using it, but there have been crashes, mostly due to drivers using it inappropriately.

Tesla has always been clear that Autopilot doesn’t make the car impervious to all accidents, and before a driver can use Autopilot, they must accept a dialogue box which states that ‘Autopilot is designed for use on highways that have a center divider and clear lane markings,’

A notable crash earlier this year was a Tesla on autopilot ploughing into a parked police car. The car wasn’t on a highway and there was no center divider. Someone allowing too much control to a system that couldn’t handle it.

It’s said that planes these days virtually fly themselves, though don’t say that to a pilot. The reality is many things are automated, but the pilot themselves has to tell the plane what to do. However, they don’t just sit there with their hands on the stick for the 14 straight hours it may take to fly from Australia to North America, but we still need the pilot for take-off and landing – or so we’re told.

How many people get on a plane with trust issues about its level of automation? Very few it seems unless you’ve seen a nervous passenger chew out the flight crew at the gate about keeping their hands on the stick. Never seen it. The difference? Maybe because we’d long ago acceded control. It was always our place to sit there and trust someone else to fly.

We may not trust our cars driving themselves, but we’re not exactly the most reliable operator ourselves. In 2015 the US Department of Transportation found the critical element in 94% of car crashes was the driver. The next two closest critical elements in a crash were the failure of a vehicle at 2% and the environment, also at 2%.

We tend to overestimate our ability to influence events for the better, yet in this instance, the overwhelming numbers show if there’s a car crash it’s almost guaranteed to be related to human involvement.

There’s that belief that events may turn out for the better if we can exert an influence on them. It’s called the illusion of control, generally, it’s more related to gambling outcomes, but how often have you ever heard anyone admit to being a bad driver? That’s always some other idiot on the road!

The closest thing we have to highlight the bad drivers in the investment world is DALBAR’s Quantitative Analysis of Investor Behaviour. A headline comparison between the returns of the US S&P 500 index and the average American equity fund investor. 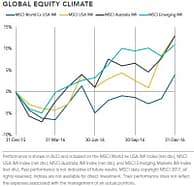 Compare the S&P 500 to the average equity fund investor over any time period and they’re behind. Note 2017 where there was a 1.19% difference, according to DALBAR the average investor had been leading the S&P 500 for most of the year. They gave up a 1.24% lead entering the last quarter, there’s no real explanation for this, maybe a brief sell-off in mid-November spooked them or maybe their heads were turned, and they sold to chase bitcoin which went crazy at the end of 2017.

Since 1994 there has been only one year where the average equity investor has outperformed the S&P 500 – 2008. What can we draw from this? As with 2017, it may suggest when there’s a genuinely strong updraft in the markets and investors feel there’s money to be made from doing nothing, they’re happy to take their hands off the wheel and let the market do the work. Add some volatility or negative market conditions into the mix and it seems the average investor is more likely to believe they’ll add value by putting their hands back on the wheel.

Over 20 years that belief would have made a significant difference to the equity portion of a portfolio. On $10,000 it’s an endpoint of $42,000 vs $28,700. That’s the difference by letting an equity fund drive itself. Clearly, there will be differences along the way depending on whether an investor is using a lump sum at the beginning, adding contributions along the way, or just starting with zero and contributing. Yet it seems clear if we look at the equity and fixed interest results – portfolios can drive themselves if we give them chance. There’s little value an investor can add to their portfolio by putting their hands on the wheel.

There are things we can control, fees, asset allocation, diversification, our own behavior, but we’ll never be able to add market returns to that list and certainly not by our own hand. Second, guessing a portfolio that’s driving itself is pure hubris, but like the self-driving car, it’s something we’ll have to accept.