Nothing can now be believed which is seen in a newspaper. Truth itself becomes suspicious by being put into that polluted vehicle. The real extent of this state of misinformation is known only to those who are in situations to confront facts within their knowledge with the lies of the day… I will add, that the man who never looks into a newspaper is better informed than he who reads them; inasmuch as he who knows nothing is nearer to the truth than he whose mind is filled with falsehoods & errors.

Such was the lament of US President Thomas Jefferson in 1807. It appears annoyance with the media hasn’t changed much in two hundred years. Jefferson’s more verbose assessment has simply been replaced with the more condensed term “fake news”. But news, or fake news, depending on your point of view, has been almost swallowed by something else.

The term content is now commonplace, and “content” is ubiquitous. Basically, all written word, audio, or video is now content. An uncharitable, but probably an accurate assessment of content, is it is little more than the end of a massive sewer pipe with unrelenting flows that cannot be controlled or curbed.

Across every social media platform, everyone is encouraged to upload something or have an opinion because platforms reward engagement. The legacy media now must compete with social media for our attention, so there’s more desperation to capture our attention with every hyped story. More trivial, less substantive.

The true issue with content is how overwhelming it is. There has never been more information available, and it grows every day. Sifting it to find what is valuable and what is garbage has become an impossible task. Wading into the muck or attempting to consume large amounts to figure out where the truth lies could take you anywhere. Online algorithms now pick up on what we’re reading or watching and feed us more of the same stuff to keep us hooked.

A struggle to decipher scare from reality isn’t welcome when a country with the fourth largest military in the world decides to dust off their tanks. The biggest threat to life many have ever known, being Covid-19, has started to fizzle out and the concern is almost over. All the epidemiologists and virologists have been ushered off our screens and shooed from the opinion pages. They’ve been replaced with geopolitical and Russian experts. Different worst-case scenarios are coming to scare us.

Depending on who you listen to, Vladimir Putin is either holding all the cards or has substantially weakened his position by moving into Ukraine. Who do you believe? Will the conflict end quickly with sanctions, or will it drag other countries in and become a bigger conflict? Those creating content are unlikely to emphasise the most mundane outcome.

We’re not suggesting war isn’t scary. All things considered, we should be thankful we live in a peaceful part of the world, but there’s little we can do about it except raise our eyebrows at the petrol pump. It’s something we cannot change. Our opinion on it doesn’t matter and we can’t predict what will happen next. Before we are led toward the worst-case scenario, there’s always the possibility it may become less consequential than we think.

The Geopolitical Risk Index (GPR) is an interesting study against local and global markets since the 1980’s. The GPR draws search results from the news archives of the Chicago Tribune, the Daily Telegraph (UK), Financial Times (UK), The Globe and Mail (Canada), The Guardian (UK), the Los Angeles Times, The New York Times, USA Today, The Wall Street Journal, and The Washington Post. From these archives, it calculates an index based on how many articles relate to geopolitical events each month, as a share of all news articles. If there’s a military build-up, a nuclear threat, an outbreak of war, or a terrorist attack occurs, a larger percentage of articles in these newspapers will be comprised by these events and push the index upward.

We plotted the GPR against Australian and global stocks since the inception of its ten-newspaper format in 1985, until January this year. 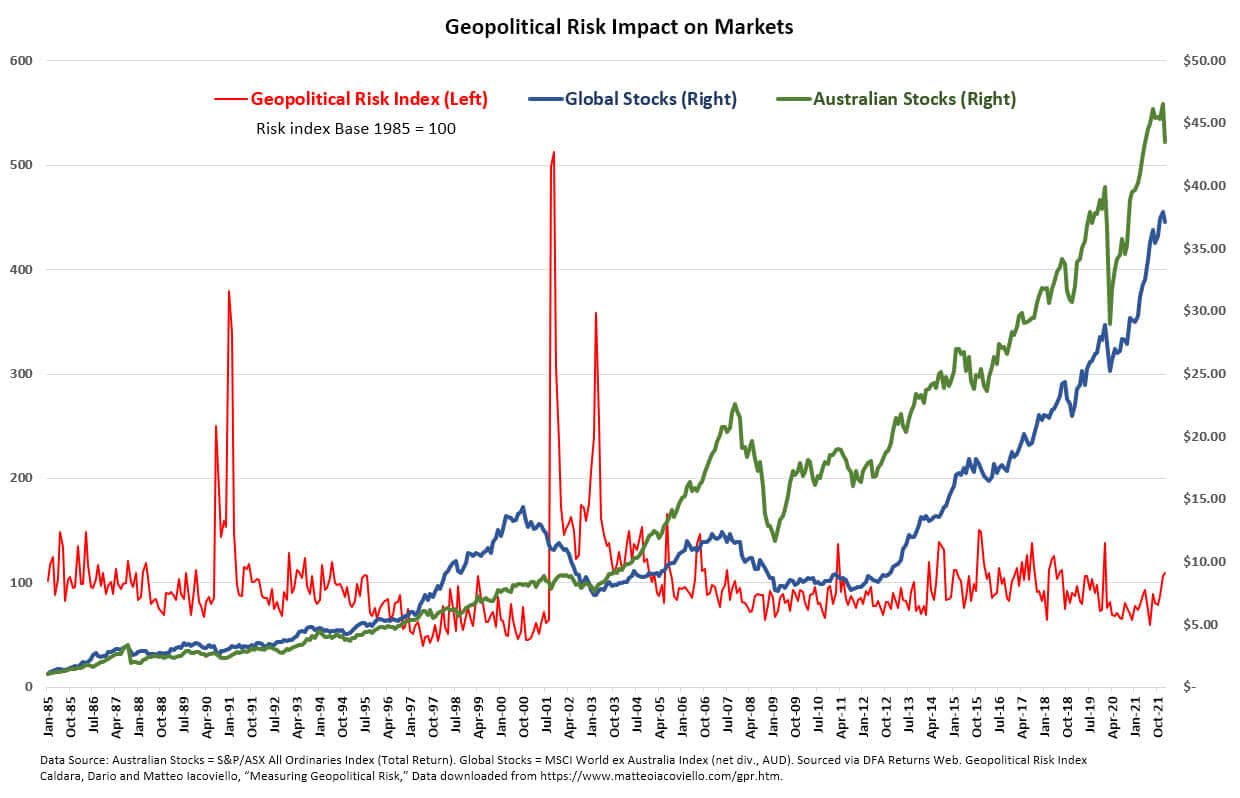 Markets have certainly reacted to significant geopolitical turmoil in the past.  This is evidenced by falls around the large GPR Index spikes, which are notable events we’d all remember.  Global stocks took a beating around 9/11, the invasion of Afghanistan, and the second Gulf War, but these were three successive and significant geopolitical events. Notably, global stocks were already on a downswing before 9/11, thanks to a bursting dot-com bubble. Between 2000 and 2005 the worst 12-month return was -33%, while in Australia it was slightly milder -14%.

The other notable event was the first Gulf War. The worst returns around this period started in late 1989/early 1990. Australian stocks took a -17% hit and global stocks a -27% hit, but there were also Western recessions and turmoil in the junk bond market around this time. Underlining there is rarely one event that contributes to large falls. When were the best returns? Not long after the worst returns! A 50% 12-month return in Australia and 33% in global stocks. Showing markets price in bad events then generally get started on their recovery.

These are two notable periods of pain relating to military conflict in almost forty years, but there’s something else to be considered from the GPR Index: the smaller spikes. Potential flashpoints that didn’t escalate into market disturbing events. A good number of potential risks fizzled out, but at one time captured the attention of the media who quickly escalated their coverage of them. All the focus and rhetoric had the potential to derail investment plans, but those geopolitical problems died down.

Which one will Russia in Ukraine be? Hopefully, one that dies down, especially for those involved, but no one knows. Like always, the best move is doing nothing because market timing doesn’t work. It’s merely setting off a decision chain. When is the danger over? When do I feel safe? It all invites more mistakes as investors second guess themselves trying to analyse events based on information that may or may not even be reliable.

Investing is navigating your emotions through history as it’s being written. Consuming endless streams of speculation, potential worst-case scenarios, and toxic waste, otherwise known as content, is unlikely to take our emotions to a good place. Thomas Jefferson’s suggestion to editors on how to better tailor their newspapers so society would be better informed?

Unfortunately, we’re on our own, and as content keeps coming at us, we must decipher the truths, probabilities, possibilities and lies for ourselves. Best to keep a check on how much content we consume.