Done over ten years from 2005-2015, the study by researchers from the University of Chicago and the University of Minnesota looked at publicly available data on BrokerCheck relating to the 1.2 million advisers registered during the time period. BrockerCheck is an open database of financial professionals run by FINRA, a US financial industry regulatory organisation.

Limiting their research to companies with over 1000 advisers employed, the researchers found 7.5% of advisers engaged in misconduct during their career and 38% were repeat offenders. This suggests past misconduct is a reasonably good predictor of future misconduct and that misconduct claims aren’t due to bad luck or frivolous complaints by unhappy clients.

When the results were broken up by a demographic and geographic basis the outcomes became a little more sinister. The researchers found areas that had lower education levels and a higher numbers of retirees experienced higher levels of misconduct. Those areas also employed higher numbers of advisers who’d previously been sanctioned for misconduct. Areas with higher incomes also suffered from higher levels of misconduct.

Misconduct levels by firm make for interesting, if not dubious reading. 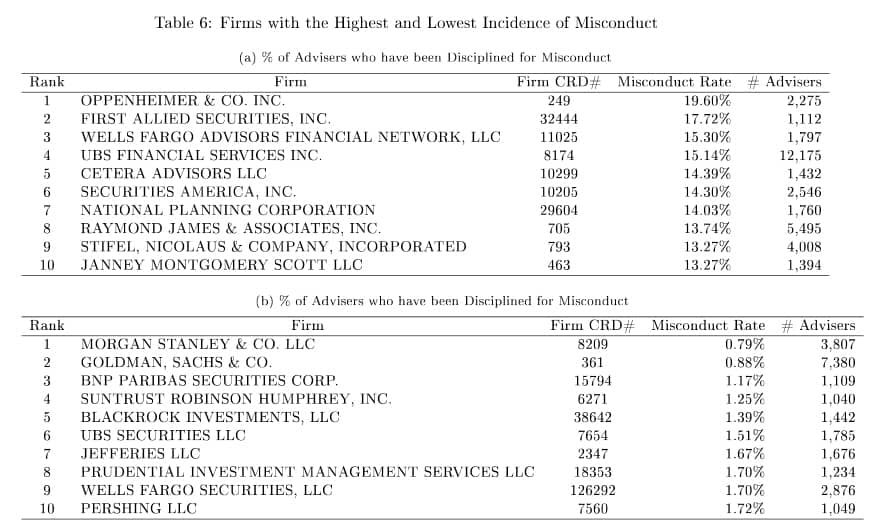 The percentages of advisers disciplined for misconduct at some firms nears 20%, and while this seems astonishing, almost as astonishing are other firms having a misconduct rate under 1%.

Particularly Goldman Sachs, who’ve been known to have serious culture issues across many areas of their business. Not noted in the report are documented instances where Goldman Sachs was fined by FINRA for not disclosing judgements against employees.

It’s also worth noting that some firms have employee names removed when a client takes action against them, so it’s only a case of the client versus the firm. While some advisers have taken action against FINRA to have their records cleared after misconduct.

So the less than comforting news for Americans suggests levels of misconduct in financial advice are potentially higher than this data suggests.

As this is a US study, does it have any relevance for Australia?

While it is a different society with different regulations there is one thing that is remarkably similar – many of these firms, just like the majority of financial planning firms in Australia, come under the banner of a larger parent company. That larger parent company almost always has their own investment funds and insurance products to sell – and those financial advisers are likely to recommend their parent company’s products, possibly due to incentives.

This is rarely in the best interest of their clients. So like we’ve said in the past, those advisers working for large institutions and banks are often little more than financial salespeople incentivised to act in their employers’ best interests.

And that’s where a rotten culture starts.

PrevPreviousDo Politics Matter To Investment Returns?
NextMeasuring the ASX 200Next