Great Returns, If You Just Forget The Costs

In the age of the internet it’s not hard to set up a website and start publishing your own views. Getting people to your website is a little harder, you need to get the public’s attention first so you can peddle whatever you’re selling.

This is where the media comes in. It helps to be quoted in the media because it raises your profile. And if you’re in the investment game and have something earth shattering to say, even better, because it can become a mutually beneficial relationship. The media can get readers’ eyes on a headline and those same readers might be curious enough to seek out and pay money for your investment predictions.

It wasn’t too dissimilar back in the 1980’s when it came to investment newsletters. Across the US there were a multitude of self-publishers who would leverage their profile from making a successful market prediction and then watch the money roll in.

One of the best, a gentleman called Martin Zweig, started in the 70’s by making a couple of successful market calls in Barron’s Magazine. The demand for his opinions afterwards prompted him to start an investment newsletter, which he published 20 times a year. By the early 80’s he had 5500 subscribers paying $165 a year.

The truly notable anecdote about Martin Zweig came in October 1987. The weekend before the stock market crashed Mr Zweig said he was worried about what might be ahead in the market, suspecting a crash was coming. In the aftermath, the value of his predictive powers soared and between 1980 and 1995 the investment selections in his newsletter apparently had an average annual return of 16%.

In 2013 Mr Zweig passed away as a very wealthy man, having owned the most expensive residence in the USA. Throughout his career he’d also combined his time as a mutual fund manager and investment adviser at his own firm, a successful author and university lecturer.

At one time Mr Zweig was regarded as an investment rockstar and investors looked to him for guidance on market direction and stock picking. Now while there’s no interest in tarnishing Mr Zweig’s legacy, there’s one piece of information that’s never considered – his returns vs the market and the costs incurred.

However, if Mr Zweig’s subscription fees are deducted as a dollar cost on an annual basis, his return falls to $84,131. In contrast, if an investor had bought a low cost index fund based on the S&P500 (coincidently Vanguard had launched one only a few years earlier) with an annual management fee of 0.2% (the same as Vanguard’s fee at the time) their return falls to $88,106, but now ahead of Mr Zweig’s return. 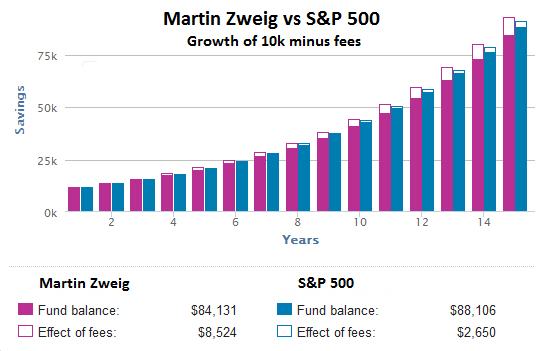 Though to actually achieve Mr Zweig’s returns an investor would have had to regularly bought and sold shares, incurring transaction fees and triggering capital gains tax in the process. It’s impossible to calculate these transaction costs and taxes without having full access to Mr Zweig’s newsletters, but we do know there would have been only one transaction cost on the S&P 500 fund to achieve that return – the buy.

Followers of Martin Zweig might have felt smugly satisfied they’d aligned themselves with the wisdom of a market guru. He’d picked the 1987 crash and provided them with returns above the market, it must have been exciting every time his newsletter arrived in their mailbox, knowing they’d have a new batch of buys and sells to execute.

Yet they may not have felt as satisfied if it had been pointed out they’d have done better just by doing nothing for 15 years.

And sure, Martin Zweig became a very wealthy man, but did it really come through investing? Don’t forget, back in 1981 he was making nearly a million dollars a year in subscription fees from telling other people how to invest!