Bitcoin Doomed or a New Frontier?

Take a look at this chart. 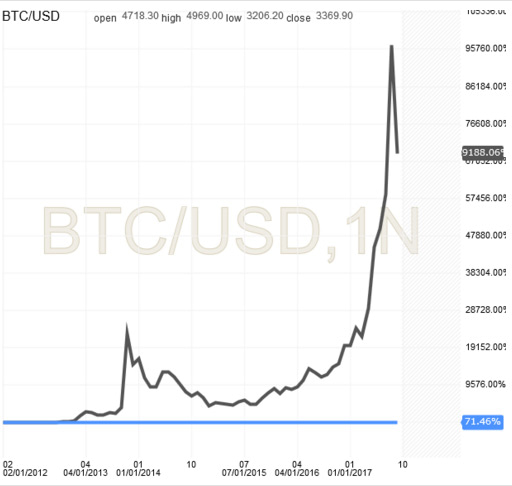 See that blue line at the bottom? That isn’t the isn’t the horizontal or x-axis. It’s a price chart showing the growth of the Dow Jones in the US since 2012 – 71%.

The black line is the monthly bitcoin price in the same time frame. In compiling the chart, the percentage return label became too wide to be visible, so for this timeframe we can’t accurately say what bitcoin’s return was, best guess says 69188.06%. However, since its first trade back in 2010 it peaked recently with a 6416460% return if you’d been holding since the beginning.

What is bitcoin or any other digital currency? A currency? An investment? The brave future of transactions to avoid government interference? It’s all up for interpretation, but it’s certainly not for the faint of heart or risk averse.

If you’re an investor there are several points to take away from bitcoin.

If you ever have the primal urge to invest in something new and unproven, the time to do it is way at the left-hand side of that chart. And with a very small amount of money and if you can’t enter with a very small amount of money, then it’s time to walk away. That way if it does come off you still enjoy those bragging rights. If it doesn’t you’ll learn a low-cost lesson.

For every bitcoin there will be a wealth of alternative investment options that end up soiling the bed and clipping many investors’ wings along the way. The nature of investing suggests there would be thousands of people currently ruing that time they thought bitcoin was overvalued at $200, $500, $1000 etc. Just like there are thousands of people who waded into some other investment that went bad. They’re currently quietly nursing their wounds.

Despite what motivational posters suggest, regret is a two-way street. You can get it from acting and not acting.

Volatility is magnified here because nobody really knows what is going on. Bitcoin advocates can deliver impassioned speeches that sound very convincing about this being the future of currency. Yet the other day, Jamie Dimon the CEO of JP Morgan Chase, knocked 3% from the price in just a few minutes by saying he thinks it’s a fraud.

There is speculation this spike in 2017 is related to Chinese citizens trying to avoid capital controls. Which does make some sense. Chinese citizens are restricted from transferring more than $50,000 USD out of China per year. While from July 2017, all Chinese banks and financial institutions were required to report all domestic and overseas transactions over 50,000 yuan, down from 200,000 yuan.

And over the last week the Chinese government has ordered local bitcoin exchanges to close. That took the price from a peak of just over $5000 to a low of $3200.

Which leads into the final point – regulatory risk. The higher bitcoin gets and the more people who pile into it, the greater the risk of government crackdown. This is something that undermines the power government has over money and taxation.