We’re a month away from the US Presidential election and while that might bring sighs of relief, it may also prompt feelings of trepidation. Never before have we seen a more loathed pair of characters running for the presidency than in 2016.

How detested are these candidates? Public Policy Poling, one of the more accurate pollsters in the US asked a selection of voters “If the choices for President were Democrat Hillary Clinton, Republican Donald Trump, and a Giant Meteor hitting the earth which would you choose?”

In the absence of a giant meteor hitting the earth, one of the candidates will be elected next month and sworn in by mid-January. From there it’s four or eight years of Trump or Clinton. Something we expect to have little impact on markets long term.

Earlier this year we looked at investment returns during the last five presidential terms. The S&P 500 pumped out double digit annual returns for Ronald Reagan, George H.W. Bush, Bill Clinton & Barrack Obama. The stinker was George W. Bush. With an annualised -4.37% return across his presidency.

George W. Bush did have the misfortune to encounter the collapse of the dotcom bubble and the collapse of the US housing market during his term. Hopefully we won’t see any similar occurrences in the next eight years, but there is a good deal of Trump hyperbole around. On the extreme side some have claimed he will crash the global economy.

In this race it is important to remember that Hillary Clinton is the establishment candidate and she’s expected to carry on in the manner business expects. Even if she has suddenly flipped to mimic Donald Trump’s positions on trade, she doesn’t give million dollar speeches to investment banks for nothing!

In contrast, Trump has said many things that spook business, but the question is, will he carry any of them out? Multiple checks and balances (congressional and senate support) exist for a reason and there are still a lot of establishment figures in the background of Trump’s campaign. Either way Trump represents the unknown.

With this in mind, if Trump is elected there may be an initial Brexit style market reaction because markets hate uncertainty. If Clinton is elected there will likely be a muted to positive reaction.

So what should you do in the event of a President Trump next month? Nothing. What should you do to prepare? Again, nothing. A diversified portfolio set up according to your risk profile will weather the few weeks of volatility. Then life will go on.

As an example we’ve prepared some charts to interpret the last eight years through various asset classes. Before Obama was elected we were told it was “end of days” stuff. This was mostly given where the world economy was, but in some circles Obama was meant to be an investment killing demon. Yet investment returns since 2009 have been very positive.

Firstly, this shows the volatility of Australian shares, Global Shares, Australian fixed interest and cash over the past 8 years. Volatility measures the amount of variation in an index, or basically it measures the risk of holding an investment. 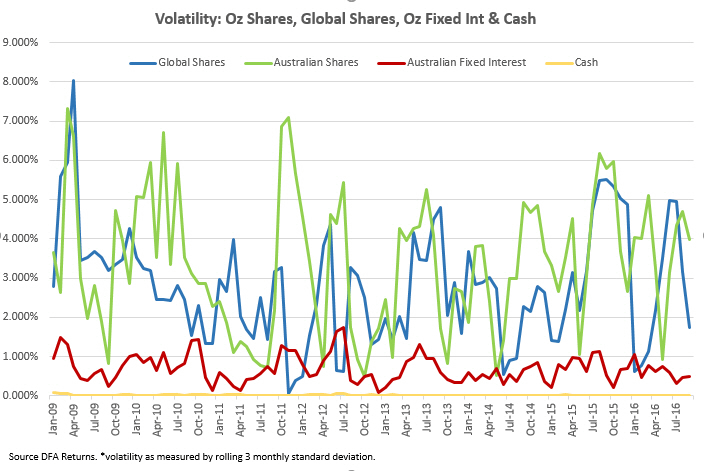 It highlights the importance of holding fixed interest assets and some cash to off-set the volatility of shares. It also shows, at least twice a year, over the last eight years, volatility screamed higher, however the next chart shows there were rewards for ignoring it.

This chart shows the growth of $10,000 over the same period for the same asset classes. While cash was non-volatile and offered piece of mind, it only eeked its way to a return of just under $13,000. Australian Fixed Interest, with slightly higher volatility than cash, offered a better return, finishing at $15,751. Finally, both Australian and global shares had much higher volatility and sometimes they tested patience and nerves, yet they both more than doubled since 2009. 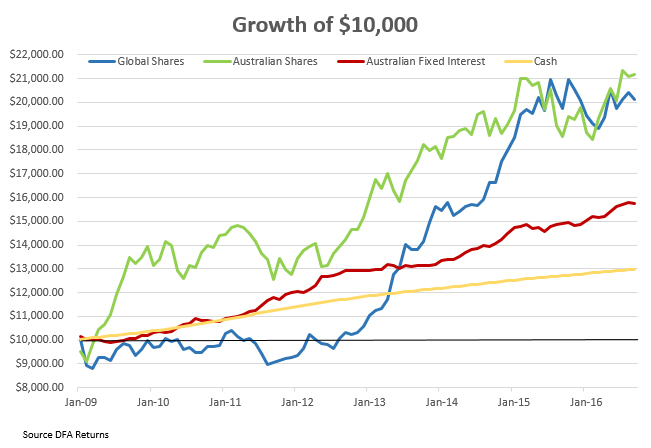 A Trump win will likely prompt another volatility spike. Accept it now. But using history as a guide there will be numerous volatility spikes across every presidential term. Selling out and running for the hills is no strategy.

Long term investment portfolios are built with those spikes in mind. They can survive Trump & Clinton, no worries.

We’re not sure about giant meteors though.