There’s been a lot of talk about fake news since the election of Donald Trump. According to some on the losing side and in the media, who found themselves often unable to reach voters, rogue groups were all over the internet creating fake news sites and concocting stories that convinced people to vote for Donald Trump.

There is some weight behind the concern. The barrier to self-publishing has never been lower. Anyone can start a website and start pumping out dubious information, but as observers of the investment and business sections of the media, we’d ask “what’s new?”

Dubious information has been peddled by the establishment media for a long time. Financial advisers often see it distorting attitudes towards investing. While the practice of big headlines when the market has a bad day vs no headlines on a good day, leaves many people thinking investing is always a losing deal.

Recently a columnist at The Australian newspaper who uses the moniker “Jack the Insider”, lamented the coming pension changes for 2017, which we’ve previously written about. In his column, dubiously titled “No Point in Saving for Your Retirement Any More” he wrote about genuine concerns with the changes, but then wandered off into ridiculous territory like this:

With interest rates at all time lows, they may as well keep their cash in a shoebox under the bed. With equities markets smacked by two global economic crises over the last twenty years, anyone who can grow their investments by more than the rate of inflation deserves a medal.

If the media is concerned about fake news, it needs to start addressing off-the-cuff nonsense like this. Here are the facts charted. This compares a conservatively balanced 50/50 portfolio (50% growth assets/50% defensive assets) against inflation over the last 20 years. 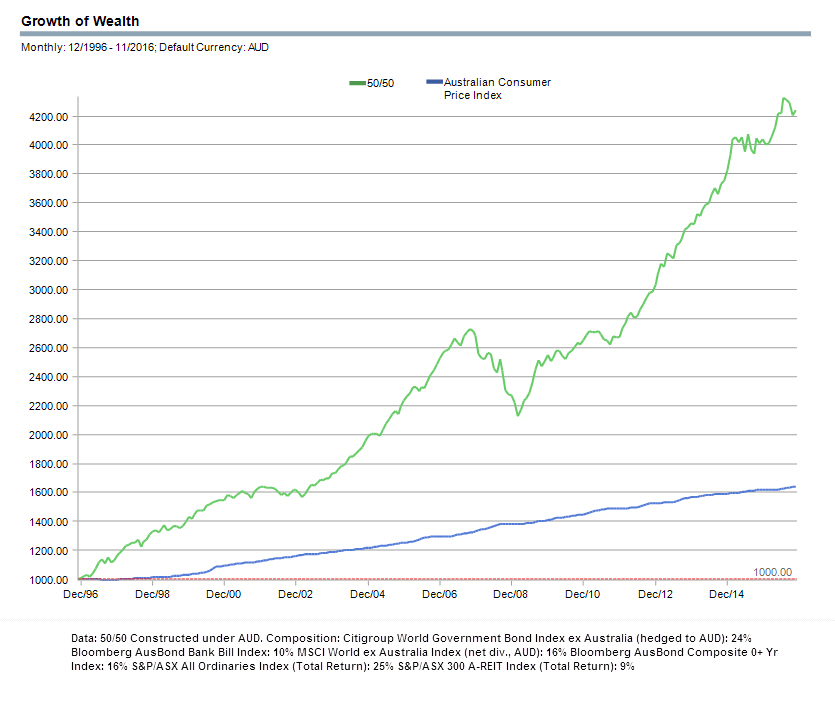 That includes the two economic crises Jack the Insider reminded us about and plenty of other hiccups along the way. This decade such a portfolio has further widened the gap between itself and the inflation rate. Since 2010 it’s offered an annualised return of 5.4% above inflation.

No one needs a medal for being able to grow their investments by more than the rate of inflation. There’s no wizardry here, you just had to ignore people like Jack the Insider and decide to invest.

For the next generation of retirees, there is an active disincentive to save. There is a form of social engineering going on here. The government is telling the punters, don’t save or at least don’t save very much for your retirement or we will be into you.

For the most part, the pension changes coming in 2017 are just reverting taper rates back to where they were previously in 2007. And we don’t recall any disincentive to save under those rules a decade ago. This is the reality when Australia doesn’t have a dedicated pension pot – when times are tough rules will be changed. Unlike Jack, we’d argue this becomes the primary incentive to save. It’s always preferable to make provision so you can be as independent as possible.

Depressingly, Jack had 500+ replies to his column cheering him on. Who knows how many others were in silent agreement believing saving and investing to be a mug’s game. The real damning part is Jack’s employer News Corp own Dow Jones – meaning he should be able to access all the same investment data we’ve just used to correct his error.

There will always be “Jacks” talking nonsense about investment returns or throwing their hands up suggesting there’s no point saving or investing. The comparison of the portfolio above against the inflation rate isn’t just a hypothetical.

The returns have always been out there. You just have to stop listening to the “legitimate” media!

PrevPreviousBellamy’s Another Lesson in Speculation
NextTips For A Better RetirementNext